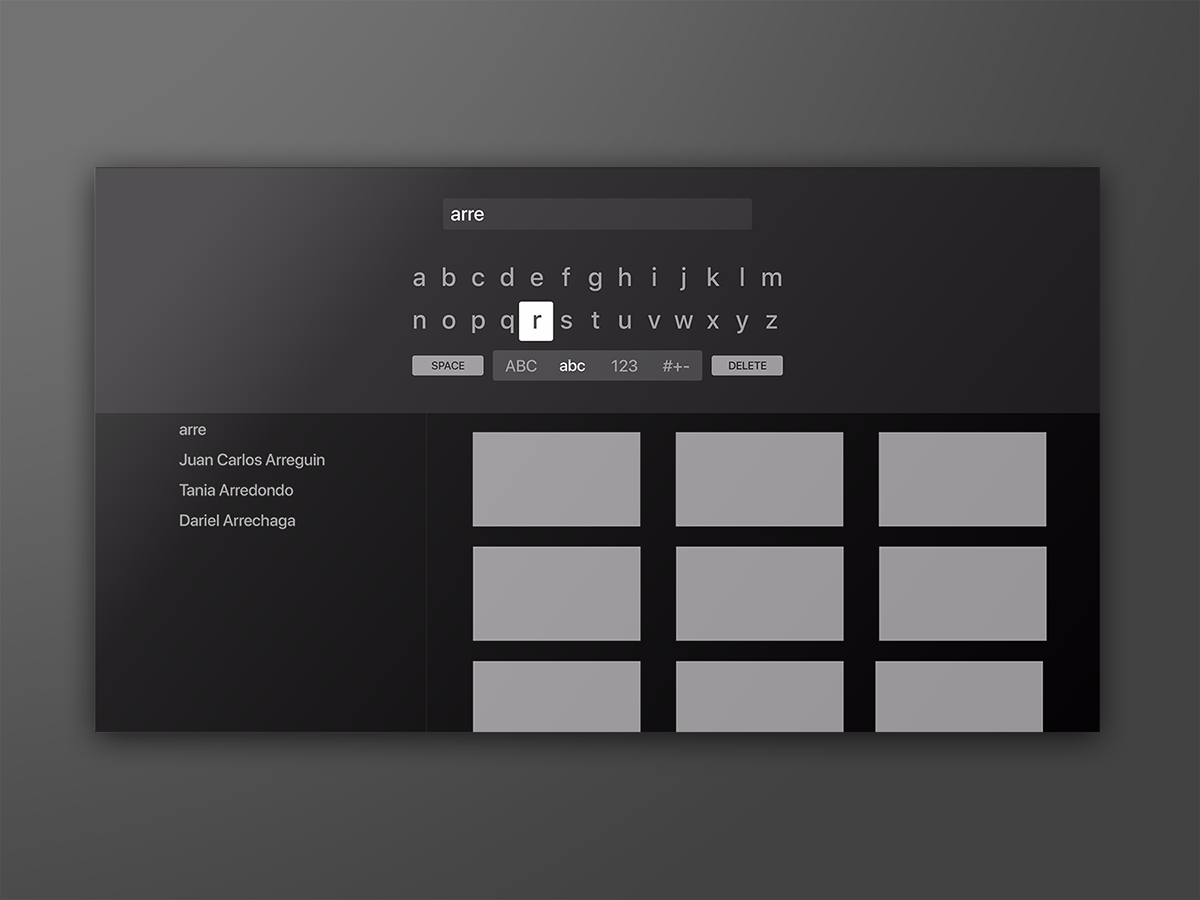 10 minutes read — Hundreds of million of users watch video-on-demand movies. However, it is not accessible to a specific group of people.

Netflix is an Internet entertainment service for more than 125 million subscribers worldwide. With one app, you can watch shows and movies on any device. But one function does not work properly. On Apple Tv. This may be due to the Human Interface Design Guidelines.

Every time I want to watch a particular movie with my friends on Netflix, there is a sophisticated search function. The same problem occurs when we want to add the movie to the list. We always have to enter the search field manually and it takes a long time. And the dictation mode doesn’t work properly because of our accents.

I was wondering why the search field is long-winded to enter the words and how we can reduce the problem. There are many users who can’t use the dictation feature due to their limited abilities. I’m talking about deaf people, foreigners and people with speech impairments.

The current layout takes too much time to enter a simple search (without dictation mode). An average user needs dozens of seconds to complete a simple word.

Firstly I interviewed a couple of my friends how they would improve the accessibility. Some of them told me that they would connect the keyboard via bluetooth to Apple TV and nobody does it, because it is too much hassle. There is also a possibility to use the game controller with Apple TV to select the letters seamlessly. Playstation, Wii and Xbox users are already doing it. Some Apple TV users are wishing to have a QUERTZ layout because it is more straightforward for them.

Then I looked at Netflix search function again and I compared it with Apple TV’s one as well as with other platforms Youtube and Vimeo. I found out that they have the similar problem because almost every app meets the Apple’s design guidelines. Although there are many problems available to other platforms which I also could solve, I sticked to Netflix because it is the only one which offers 100% subtitles for Deaf people. The German TV programs doesn’t even meet this standard. That is why almost every Deaf user in Germany has a Netflix account. Nevertheless I want to improve Netflix accessibility a step further.

Before I continue with the results, I want to remind you that you should observe not only the digital but also the environmental problems.

Everyone who wants to watch Netflix needs a device like Smart TV’s, streaming players such as Apple TV, Fire TV (Amazon) and Chromecast (Google), game consoles and many others. In addition, the user needs a remote control which allows him/her to control the settings. That is, I included the observation of the interaction between the user, the display, the Apple TV device and the remote.

I am going to describe two main thoughts about the remote and the lettering.

The user needs the remote to control the TV to watch movies. I asked myself a couple of questions.

I noticed that a regular Apple TV remote has 6 buttons and a touch panel. Almost everybody controls the remote with the thumb to press or to feel the buttons and the touchpad. This feature allows the user to select every single letter with the thumb on the touchpad and press it to select it. It takes dozens of seconds for the user to set name of the movie. Inexperienced users needs minutes because they often mistype. This means that every time a user mistypes a letter, he or she has to go all the way to the right to delete a single letter, then go back again to continue.

I know that the remote has an accelerometer and gyroscope function, which means that certain applications allow users to use remote in three-dimensionally to control the functions. This means that the user can call the shots by lifting the remote or steering it left and right. So I thought about the idea of drawing the letters in the air as a faster way than typing with the touchpad.

Using Apple TV remote to write letters in the air. It is not an intuitve way for users.

Writing letters on the touchpad of the Apple TV remote is not intuitive. It can be difficult for users with large hands.

The user can also purchase a game controller or a keyboard to control the Apple TV. It is probably the easiest and the fastest way, but also a more expensive one because of the initial cost. So that is not quite feasible.

In general, these ideas are difficult to implement because the letter drawing is not intuitive for the user and may be too complicated to use. The additional devices are probably the best way if the user is willing to invest the money. But there is also a question of installation. 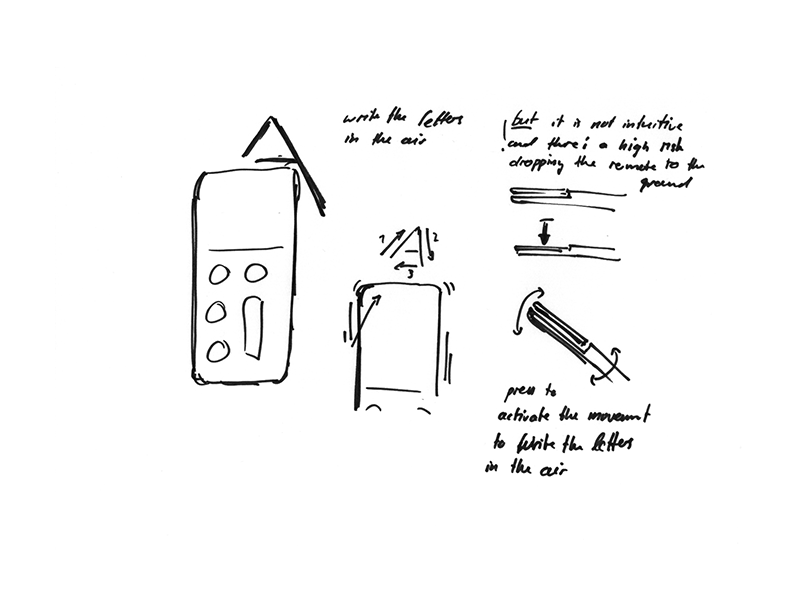 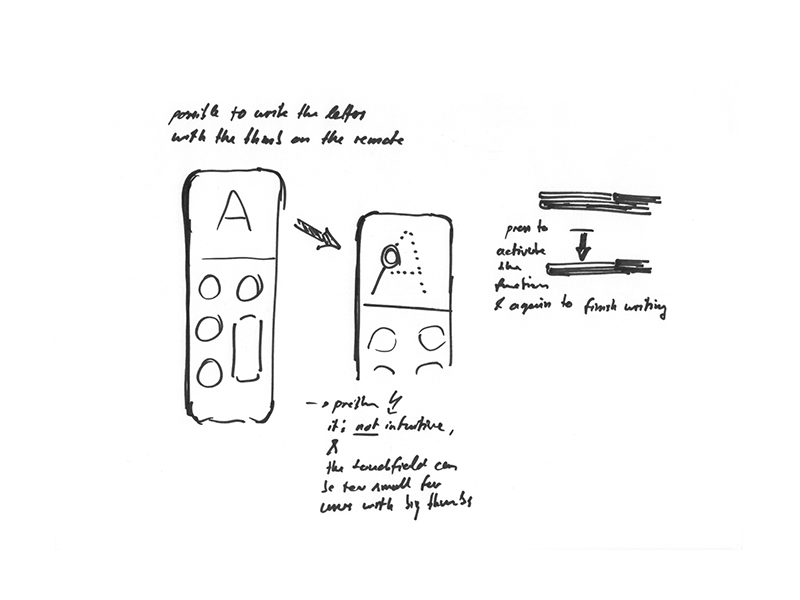 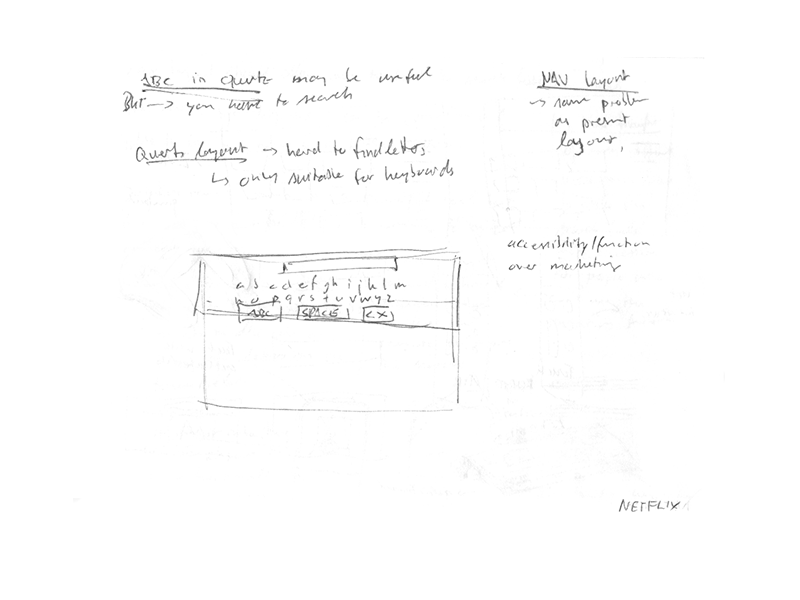 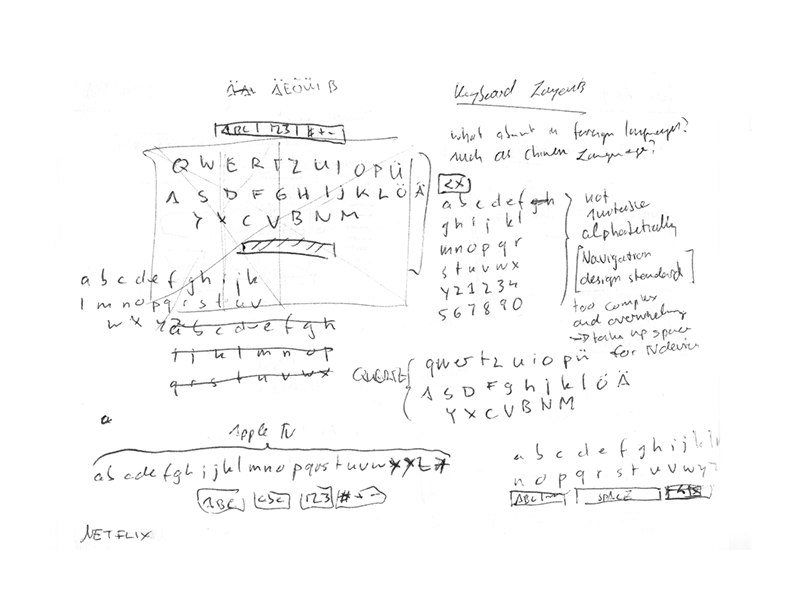 The default input style on Netflix ranges from space bar to A to Z and at the end of the backspace button. Below the letters are the additional functions. In addition to the standard layout, I quickly drafted various lettering structures. There are letter layouts in QUERTZ style, the typical navigation lettering in 5 parts. I also tried splitting the alphabet in two or three parts.

Various lettering layouts to find out the most logic approach for the users. I tried to split the alphabet into two or three parts to reduce the complexity of the overview.

It was a challenging process because I always had to keep an eye on foreign languages. The English alphabet consists of only 24 letters, while the German alphabet has 27 letters. Because it contains special characters Ä, Ö, Ü and ß (the double s’ ). During the movie evenings I noticed that most users don’t care about the correct uppercase and lowercase letters. They mostly use lowercase letters, because the search function understands them easily.

Later I created a high-fidelity mockup to get a feeling for which layout is the most efficient, effective and enjoyable. The QUERTZ-letters layouts are quite difficult for the user to use with the remote instead of the keyboard and it also takes longer than the single line layout. The navigation lettering takes up too much space and it intersects with the content.

A gallery of 7 high-fidelity mockups shows which one is the easiest to use and meets the Human Interface Guidelines.

There is a layout that least affects the user. The two-line structure layout. It has the following advantages:

An animation shows the ideal search function for all users.