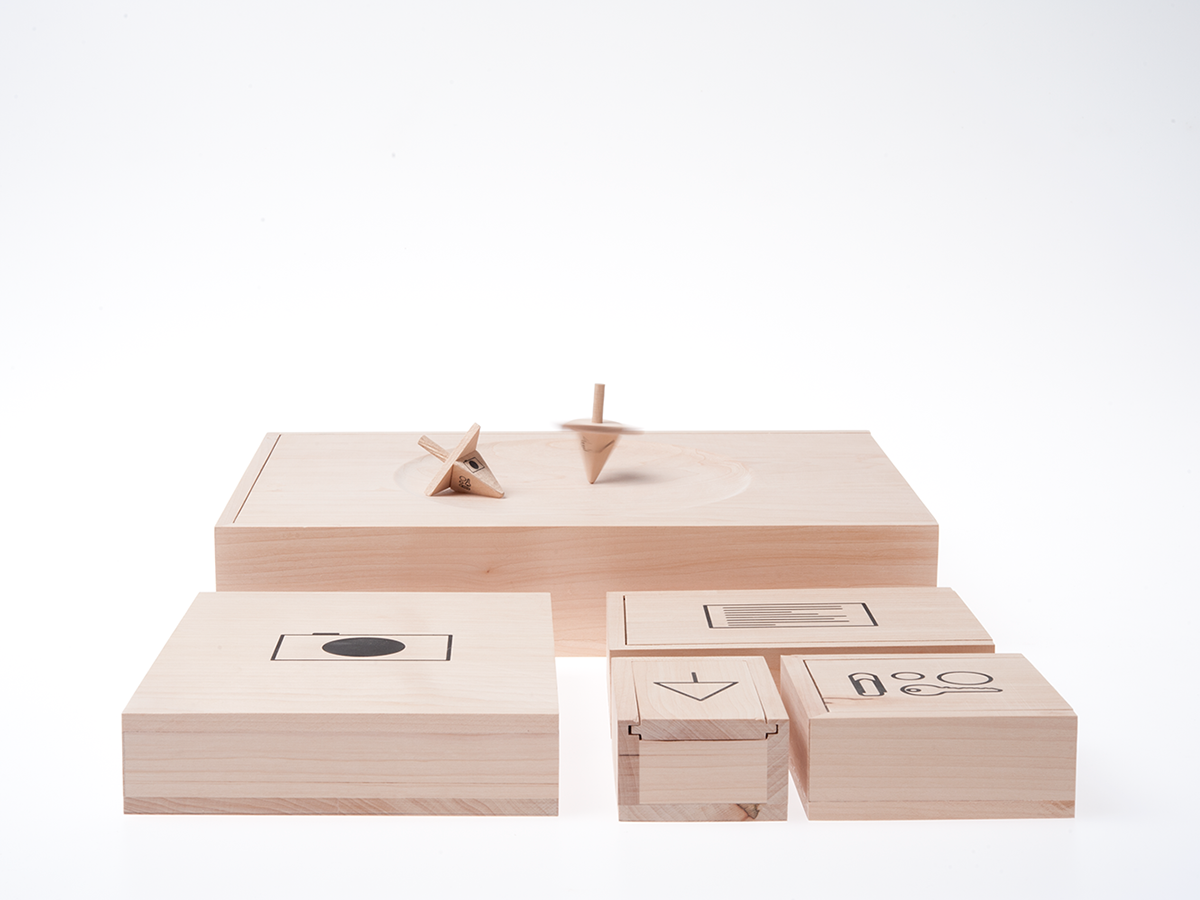 10 minutes read — RICORDO connects generations together by telling stories — without display, no tapping, no wiping. RICORDO is made of wood. Its drawers hide things allowing you to touch. They call memories and encourage people to talk about things that connect generations. 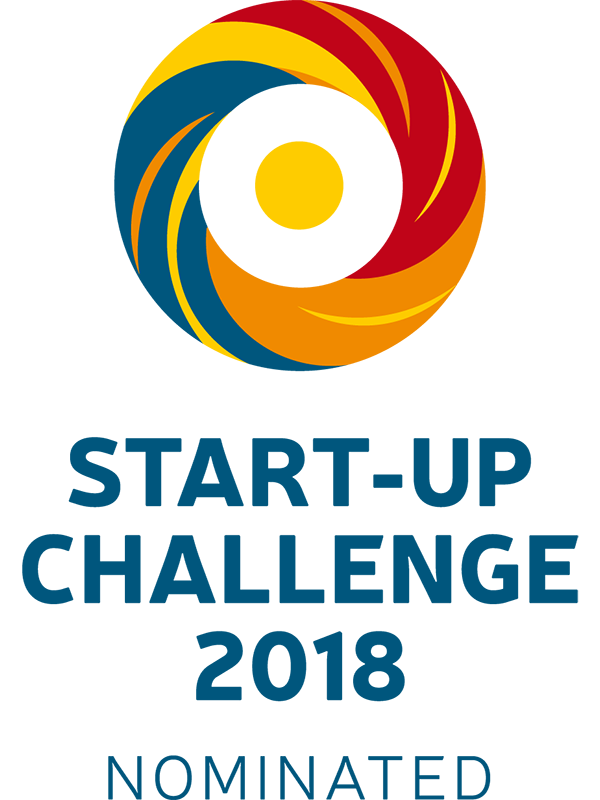 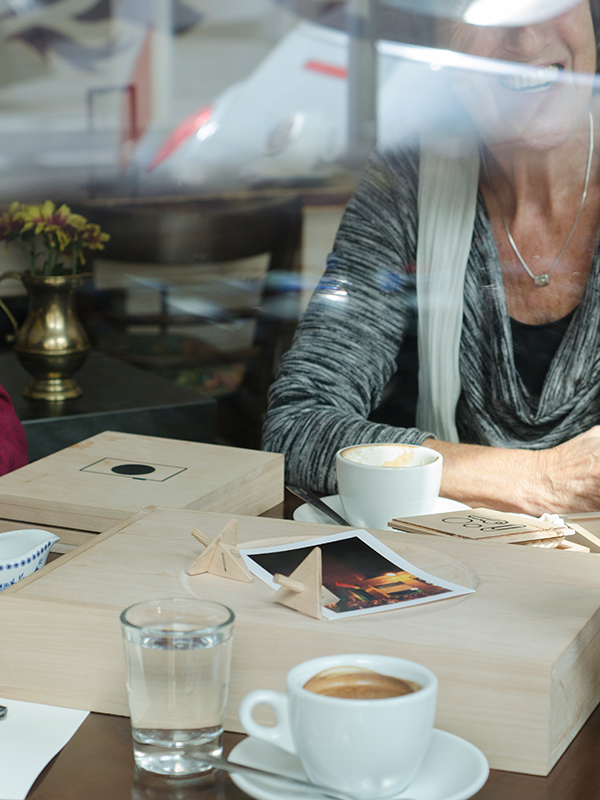 RICORDO is an intergenerational game board. It was created at the Free University of Bolzano, Northern Italy under the supervision of professor Claudio Larcher. It was the second year of my Bachelor’s project and its name was “Made in Italy — design ed autoproduzione”. Our task was to create anything as long as there are self-handling products. The main challenge was to create a simple product avoiding high costs and complex production processes. 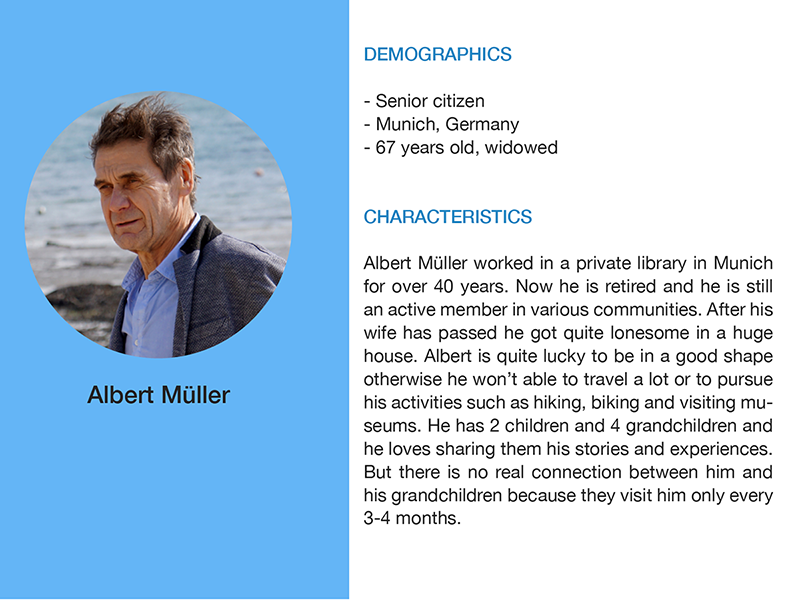 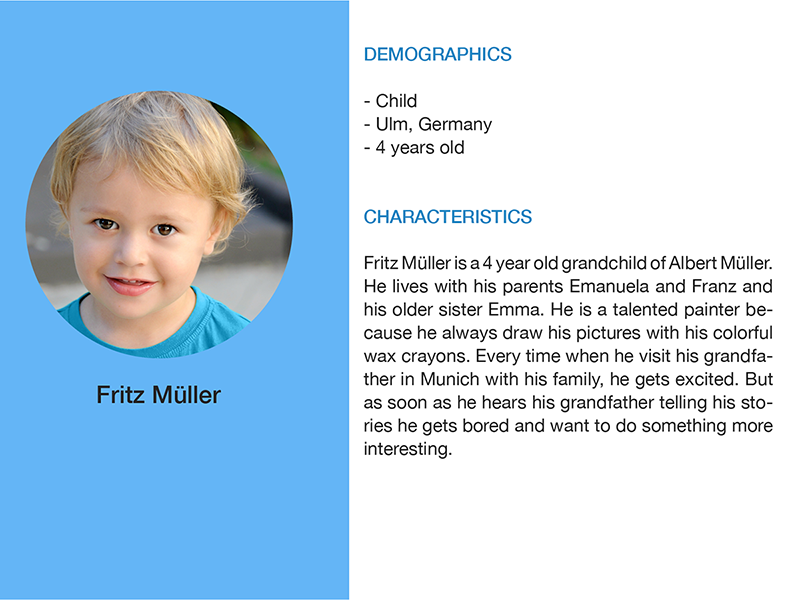 Fictional stories or also called Personas helps me to determine the target group. Albert Müller, the grandfather is one of them.

When starting the project I wanted to help other people, especially children, handicapped and seniors to meet the real needs. During the research I found out that the seniors are the outsiders in a fast-pacing society because the main problem of modern society is the communication. Communication is decreasing between generations of people. It is happing because of the increasing influence of the new media which is actually not “social” at all.

The first approach was to stimulate the social relationship between different groups of people by developing a game. You know that playing a game brings people together and encourages gathering. I wanted to avoid the fierce challenges by bringing people together in a peaceful way and encouraging them to pursue a common goal.

I shifted my focus to seniors and children. I wanted to give the seniors the possibility to pass their stories to children. In this way children can learn life stories from their grandparents. You should know that most of the seniors don’t have either an internet connection nor a computer. They even don’t know how to use it. The children are also in the same situation.

To accomplish this goal the game should be designed simple. It should be understandable for seniors and also for everyone without the need of a user’s manual. I thought about some basic infographics giving you some necessary informations on the content and the actions of the game.

The fictional character Fritz Müller is the grandchild of Albert Müller. The game board RICORDO is going to create a new relationship between the grandfather and his grandchild.

Communication is decreasing between generations of people. It is happing because of the increasing influence of the new media which is actually not “social” at all.

The next step was to find out how to bring both groups together. I found out that things can stimulate specific individual associations and evoke memories.

So I developed a simple prototype, made of cardboard. The cardboard boxes contains a random number of small things. Each player can take his own things and put it in the boxes – there is no rule.  But in order to inspire the creativity of the players I have put some samples in the three boxes: some photographies; some small objects, like pieces of shaped wood, a paper clip; and some paper cards which show one word in four languages like “desire”, “church”, “first love”.

That is why the game board is called RICORDO. RICORDO is from Italian and it means “memory”. It also means keepsake, “souvenir, relict or even a reminder referring to the objects, which are a part of the game.

The form of the box was inspired by my friend who was once bringing her sushi in a Japanese bento box to the university. People usually store their lunch in a box but my box allows keeping your memories.

To make the game more exciting, I wanted to give the seniors and children a challenge by using a spinning top instead of a dice. Everybody can throw a dice but to use the spinning top you need to improve your fine motor skills if you want to play the game.

The prototype was tested in various groups of people. They played the game with a great enthusiasm. The game created a relationship between relatives, friends, acquaintances and even strangers. They also found their lost memories after seeing certain objects.

One of the first prototypes were inspired by the Japanese bento box. 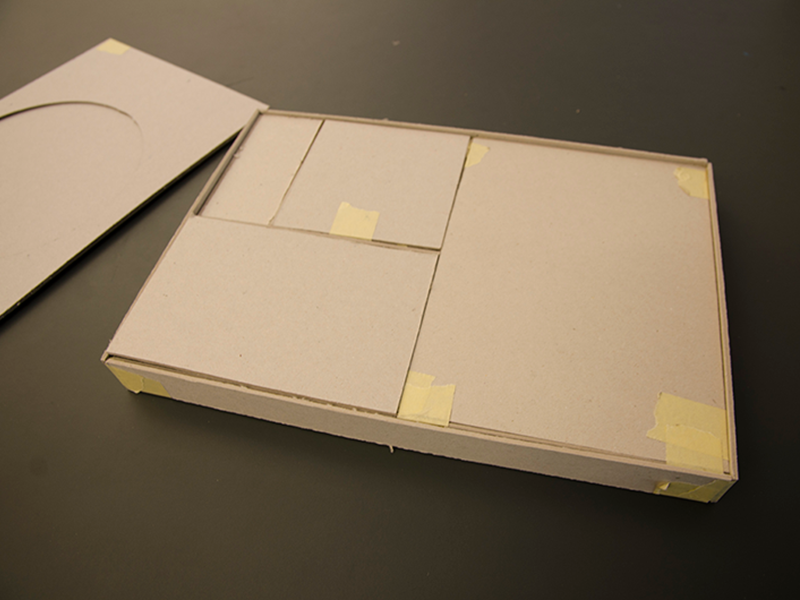 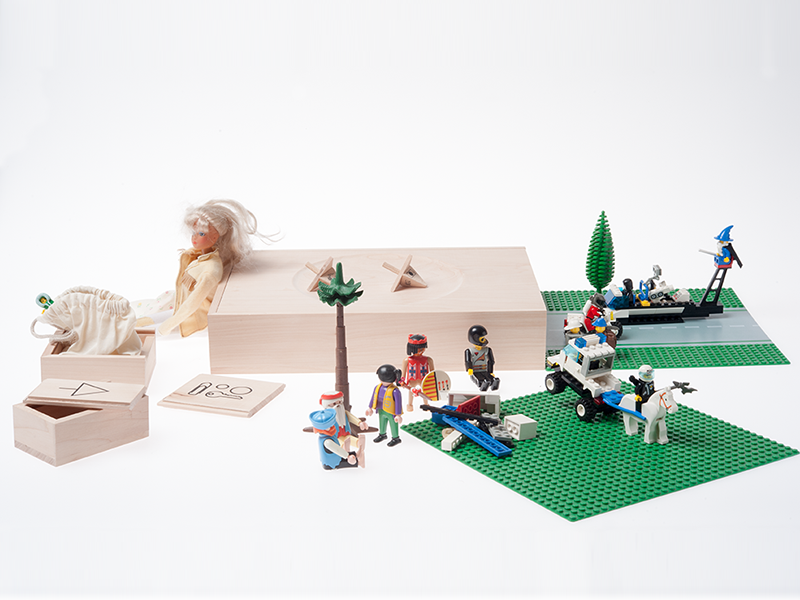 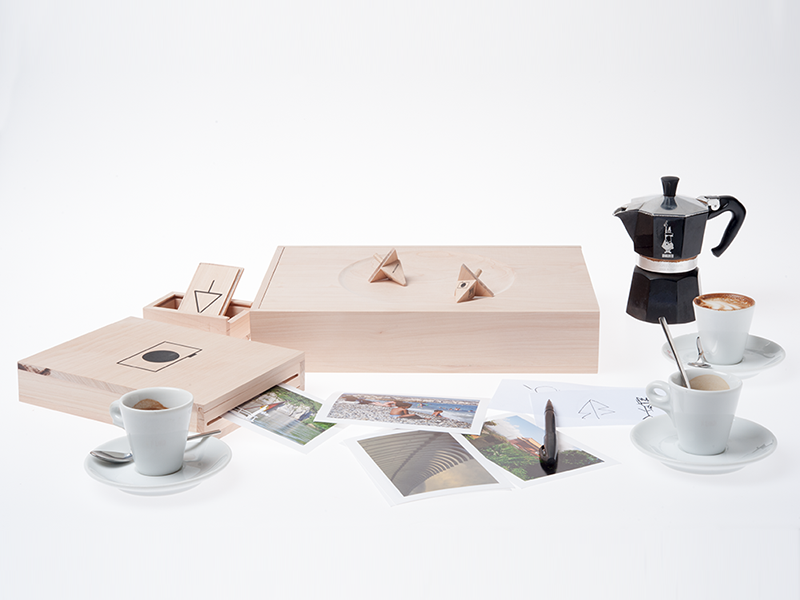 From this very point I was convinced that this concept could be a workable ground. So I started with the next step: exploring the details and planning the working process. I put the concept into dozens of sketches how the final product should look and how it should work. How the lid should be opened and how small things could be stored. How the storage and the playground could be combined. There was also a question of material and the production process.

A day before the deadline I asked one of my friends to try out the game board. He opened the lid and then he tried to get the littles boxes out from the huge box. He asked me how to do it. I was shocked because I completely forgot that the users should have the possibility to get the boxes out in order to play. I ran back to the workshop and drilled a little hole, about the size of a toothpaste cap on the bottom of the game board.

At this time I was convinced that the game board needs more work to make it a final product. The game board is made of maple wood. It looks very simple and noble and has an appearance of worthiness. It is also timeless and understandable because of the elementary infographics. They enables the understanding at story-telling and playing with various people.

The senior citizen are testing and playing the finished game board in a small coffee bar. 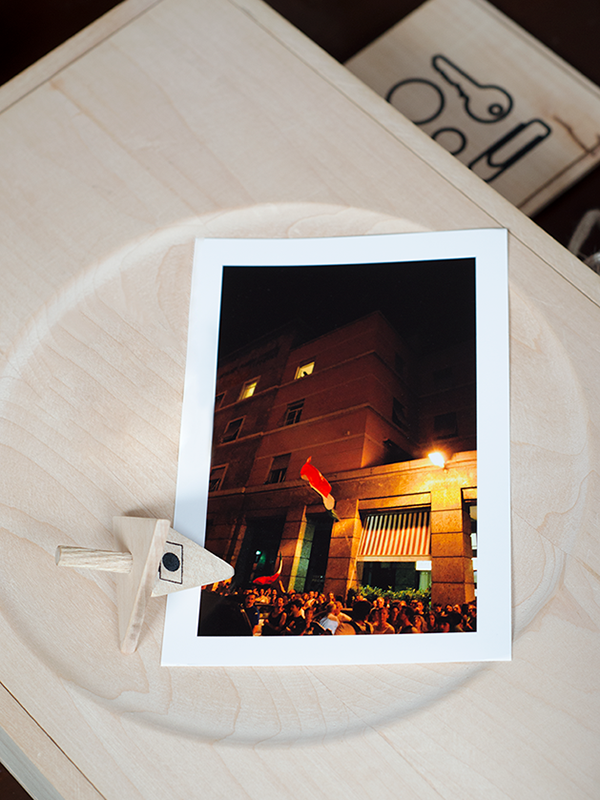 4 years later my future wife discovered the game board and asked me why it was lying around. I answered her that I never found the time to improve the game board when the project was finished. She persuaded me to give it another try. I tested it again with seniors in Munich. Many of them loved it but one criticized the game. He didn’t know how to start telling a story because the there were almost no rules. I understood that there must be a game guide included to moderate the players.

Around this time I was writing my Master’s Thesis on Communication. There I had the possibility not only to introduce my Master’s Thesis but also the game board RICORDO to T. Bade, the counselor at International Association for Universal Design — IAUD. He was impressed of it and he told me to submit it to Start-Up Challenge. I did it.

RICORDO got nominated for the Start-Up Challenge. It didn’t won the prize but it thrilled many visitors at the fair of elderly care in Hanover. Even one senior citizen was very moved by the game board. He told me that it is the only possibility to keep his memories and he can pass those to his next relations after his death.

There is no ending, because the development of the game board is still continuing. It is going to be improved, produced and sold. It is not going to be a mass product. It only belongs to people who really care.